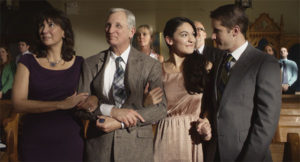 A Love Story with God at the Center

Jonathan and Evelyn were once deeply in love, but when Evelyn’s priorities caused her to push Jonathan away, she pushed God out of her life with him. Many years later, their adult children strike up a romance, and the two, now both widowed, find themselves confronted by their unaddressed past. It is Jonathan’s steadfast faith that guides him in bringing Evelyn home to the church… and his arms.

Fans of Healing River will be delighted to see that Promises to Keep‘s leading lady is none other than powerhouse Christine Jones. Newcomers will find that the award-winning actress brings a depth of emotion to the role that is a rare gift. Less recognizable, perhaps (though no less formidable), is her romantic opposite Jonathan, played by Mitch Teemley. This triple threat is the writer and director of both Healing River (the powerful faith-based drama) and this summer’s goofy family fave, Notzilla. The chemistry between these two actors keeps us with them through every peak and valley of their relationship.

Promises to Keep is available now (for free!) to watch or buy on Amazon Video,  IMDb TV, and TUBI TV. Ad-supported streaming is free, and uninterrupted play is available with an IMDb TV subscription.